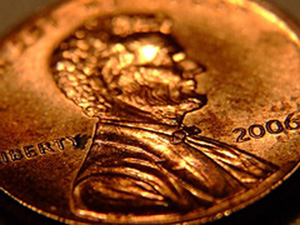 A penny landed on the ground just outside the door of my car this morning.

That penny was face-up.

Interestingly enough, people look at a six-foot tall bald guy squatting to take a picture of a penny on the ground slightly askance. Especially when said penny lies mere inches from a car belonging to a person seeking to re-enter the vehicle belonging to them. I stood bashfully, and scurried away to purchase my Mountain Dew and pop-tart without further incident. (No commentary here on the quality choices I make for my morning caloric intake – those will come later.)

As I made my morning commute though, I thought of my day, and I prayed that I might be a channel of the healing grace afforded so abundantly to myself. I prayed for a day in which I would embody the principles I so long to transmit. I prayed that I might be an example to the people I serve, and that they in turn might do likewise with others. I prayed that my mind would be clear and that I would say the words that touch someone’s heart. Words that provide the spark that turns into the fire that lights a person’s soul ablaze, and creates the kind of energy and momentum that moves the mountains of our mis-perception and leads us home.

I taught. I felt. I did my best, and it was great.

I went to lunch.

I saw a car catch fire. As the car burned, my lunch partner inquired whether or not the car would explode. I answered a calm and reassuring no, but really I didn’t know what would happen.I withdrew to my inner-self for a while.

I thought of the owner, of her day – interrupted. I thought of her plans, of her children. I thought of the people videotaping the scene, gawking at misfortune. I though of my own fires, and disasters, and loss. I returned to my own pain, and wondered what this event might mean for the owner. I know what it would mean for me. It would mean a divergance from my plans and designs, a journey down an unfamiliar path to a new place, one which I never intended upon heading. Would I be afraid? Most likely. Would I go anyway? I couldn’t not.

We couldn’t not. Those words rang through my head one morning. The symbol of strength which I had come so deeply to admire stood before me and replied my query with these three simple words. I responded the only way I knew how. A smile, and a most desperate act of love.

I went to class.

Funny thing. As if the whole penny thing this morning wasn’t enough, we studied probability tonight. Are you aware that the formula and calculation to determine the probability of two pennies being flipped and each landing on either their head or tail looks like this: P(hh or tt)=P(hh)+P(tt)=.25+.25=.5? This has nothing to do with anything except the fact that sometimes there is a certain inevitability involved in the path of a day, a week, or a life. Sometimes those inevitabilities intersect and we call them coincidences. Sometimes those coincidences have the power to overwhelm us – to consume us, and render us something we weren’t before – to change us forever.

Sometimes, when I’m overwhelmed with the simple beauty of the random order, the probability, the inevitability of it all, I have to just stop and breathe.